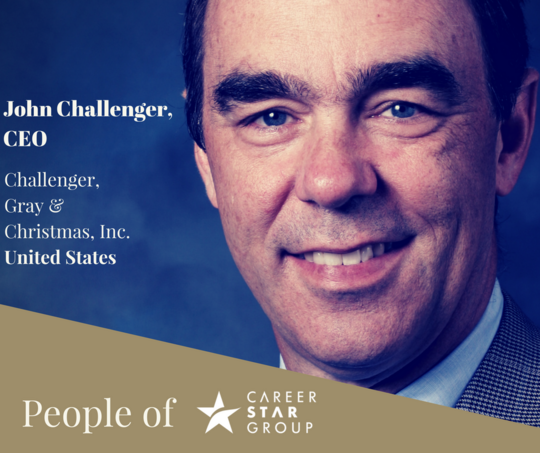 John A. Challenger is chief executive officer of global consultancy Challenger, Gray & Christmas, Inc., a firm that provides high-end outplacement support to executives who depart from their companies and to the individuals at all levels, exempt and non-exempt, who lose their jobs in downsizings, layoffs, and business restructurings. The company also provides executive coaching for c-suite, middle-management, and high-potential leaders.

A recognized thought leader on workplace, labor, and economic issues, his insight is often sought out by major foreign and domestic broadcast and print media. Challenger is also frequently sought out by conferences, industry groups and professional associations for his perspective on the latest trends and developments impacting their members. He has delivered keynote addresses to the World Future Society and to a joint session of the Business Continuity Management Summit and Risk Management and Compliance Summit, organized and hosted by Gartner, Inc. He spoke at the inaugural Leadership Development Program at the Executives’ Club of Chicago.

Challenger was invited by the mayor’s office of Chicago to join the Mayor and prominent business leaders at a Job Summit to address unemployment, job creation, and other economic issues. Challenger has delivered keynote addresses to Summit at Fisher, conducted by The Ohio State University, Fisher College of Business; the UCLA Anderson School of Management; the annual conference of the Ethics Officers Association; and conferences of leading business executives in Japan. Challenger gave testimony before the U.S. House Committee on Small Business on the issue of permanent job loss in a global economy. Challenger also testified in 2017 before the Equal Employment Opportunity Commission on the topic of age discrimination in the workplace.

At the height of the turmoil over corporate governance, Challenger authored an article on the issue for the OpEd page of The Wall Street Journal. He served on the labor/human resource committee of The Federal Reserve Bank of Chicago for two terms. Challenger is very active in professional, industry and civic organizations. He currently serves on the boards of Children’s Memorial Hospital and the Economic Club of Chicago. Also, Challenger sits on the board of Skills for Chicagoland’s Future, an organization whose mission is to close the workforce skills gap and move the unemployed into open positions by directly responding to the hiring needs of employers. He is a member of YPO Gold, Chief Executives Organization (CEO), and the Commercial Club of Chicago. He was on the host committee of Chicago 2016, which sought to bring the Olympic Games to Chicago.

For the past ten years (2007 to 2017), Challenger has been listed among the Who’s Who in Chicago Business, published annually by Crain’s Chicago Business. A graduate of Harvard University, Challenger is a member of the Harvard Alumni Association and served as Chair of the HAA Nominating Committee for the Board of Overseers in 2012. He was President of the Harvard Club from 2002 to 2004.