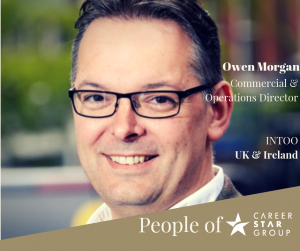 As Commercial and Operations Director for INTOO UK & Ireland, Owen’s key focus is to ensure all the organisation functions run smoothly and efficiently. He also has ultimate responsibility for ensuring that INTOO’s portfolio of services reflect current and future market needs and are continually delivered to the highest standards.

I genuinely believe in giving people clear and straightforward career advice. With ‘life’ becoming increasingly hectic, and the world of work becoming ever more complex, it’s important that people understand what their career means to them and how they can shape it and develop it in line with their aspirations. – Owen Morgan

Having worked in the HR space for over 15 years, Owen understands the challenges organisations face with regards to their talent. A natural people developer, he firmly believes that supporting people to realise their full potential is the key to long-term business success.

Owen started his career in the Oil & Gas sector with Petrofina SA, before moving to Total where he held a number of management positions encompassing: Logistics, Retail Management, Aviation Sales and Refinery Operations. In 2001 he joined Penna plc, contributing to its growth through his appointment to a number of senior management roles, including Director of Penna plc.  Owen left Penna following its acquisition in 2016 and was invited to help contribute to the growth of Gi Group in the UK, initially focusing on setting up the INTOO brand.

Owen holds a BSC Hons in Geography, an MBA and is an NLP practitioner.

INTOO UK Hosts Carlos Davidovich to Discuss How To Thrive Under Pressure Sept. 25